Smithfield Officers received a call from the home owner at 27 Concord Street, advising there were several subjects in his yard and on his rear deck.  The home owner gave a description of the suspects and the vehicle they left in.  Smithfield Officers stopped the vehicle matching the description on Willow Road.  Officers took the suspects into custody, without incident.  The vehicle, which was stolen out of New Jersey, was searched by Smithfield K-9, Ajax, and 6.572 oz. of marijuana and sixteen 2mg pills of Alprazolam (Xanax), were located in the center console. Officers also checked the Concord Street residence and found that the screen on the rear deck slider had been opened.

Pinkerton, Diaz, Hernandez and Thompson were held overnight and later appeared in Kent County District Court before the Honorable Magistrate J. Patrick O’Neill.  Pinkerton and Thompson were held without bail as Superior Court Violators, and bail was set at $10,000 surety on the Smithfield charges.  Hernandez and Diaz’s bail was set at $10,000 surety.  Their Pre Arraignment Conference date is May 20, 2019.

Posted on February 22, 2019 by Smithfield Police in Community Police, Information 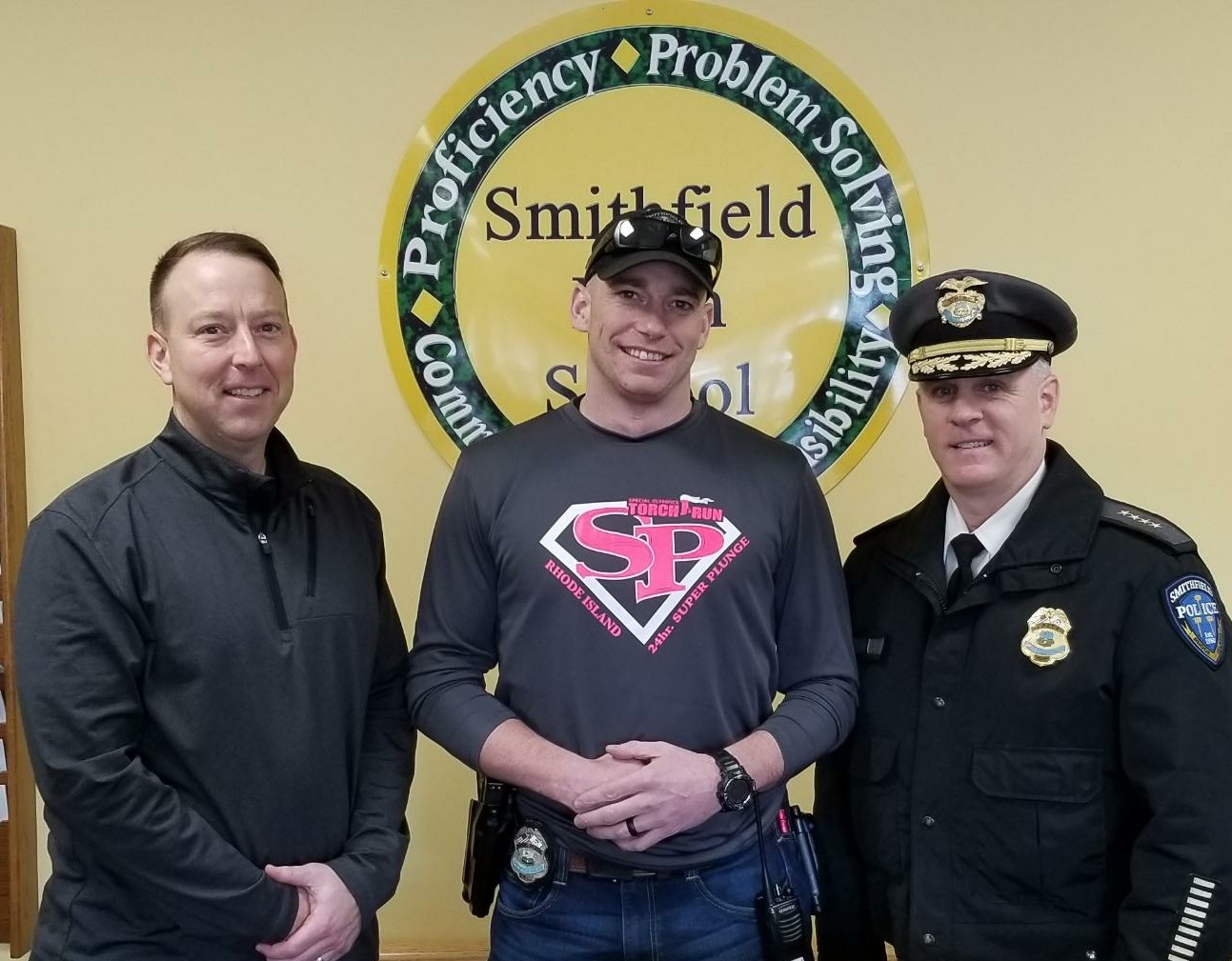 SRO Ricciarelli and his dad, Dave, will brave the frigid waters at Salty Brine State Beach on March 23rd & 24th to participate in this year’s 24-hour “Super Plunge,” which is highlighted on SRO Ricciarelli’s shirt. [Super Plungers will plunge once, per hour, for 24-hours!]

To donate to the Ricciarelli’s efforts, as well as Special Olympics of RI, click on the following link https://www.firstgiving.com/fundraiser/jon-ricciarelli/Super-Plunge1.

As always, please support “unified” sports & events in your community.

Posted on February 11, 2019 by Smithfield Police in Information

The Rhode Island Chiefs of Police Secretaries Association (COPSA) will be offering a scholarship in the amount of $500 this year to be awarded in June, 2019.  This one-time award will be given to a high school senior, or anyone possessing a GED, from any Rhode Island high school who has been accepted into a BUSINESS program and has a good scholastic average.

Applications can be downloaded on the following websites:

Applications must be postmarked by Monday, May 13, 2019.  Send completed forms, letters, and transcript to:

If you have any questions, please contact one of the Scholarship Committee members: Lisa DiSciullo, Smithfield Police at lisa@smithfieldpd.com; Ginnie Bowry at gbowry@gmail.com; Lori Anderson, Johnston Police at Landerson656@yahoo.com; or Patricia Tweedie at ptweedie@cumberlandpolice.com.