On Saturday, January 19, 2019, at approximately 11:55 pm, Smithfield Police responded to the area of Putnam Pike at Cedar Swamp Road for the report of a vehicle that struck a RI DOT snow plow and left the scene.

Mr. Ruiz appeared before Bail Commissioner Peter Hopkins and was arraigned on the following charges: Driving Under the influence of Liquor or Drugs 1st Offense BAC Unknown (31-27-2), Eluding a Law Enforcement Officer (31-27-4.1), Obstructing a Police Officer (11-32-1), and Driving Without a License 3rd Offense (31-11-18).  Mr. Ruiz’s next scheduled court date is Tuesday, February 5, 2019.

Mr. Ruiz was released from Smithfield Police headquarters and turned over to ICE Agents.

Posted on January 10, 2019 by Bill Pilkington in Community Police, Information

The Smithfield Police Department is now accepting applications for enrollment into the Female Self-Defense Course, which consists of a five (5) week self-defense program geared towards women ages fifteen (15) and up. Participants will meet on Thursday evenings from 6:30 to 8:30 p.m. starting February 21, 2019.

The course is offered free of charge to any Smithfield residents, Smithfield High School students or employee of a business in Smithfield who is at least fifteen (15) years of age. This hands-on course will teach participants how to avoid being targeted and what action to take if selected as a victim. Seating is limited and will be on a first-come-first-served basis.

Posted on October 4, 2018 by Bill Pilkington in Information, Press Release

Carson Ames was taken into custody without incident.  He was held overnight to appear in Kent County District Court on Thursday, October 4th, 2018.

Posted on September 28, 2018 by Bill Pilkington in Information 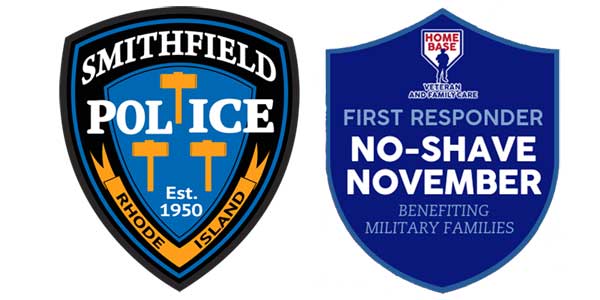 Smithfield Police to join first responders across Red Sox Nation in support of the 4th annual Home Base “No-Shave November” campaign: Home Base is a Red Sox Foundation and Massachusetts General Hospital Program that helps Veterans and their families heal from invisible wounds, such as PTSD and Traumatic Brain Injury. During the month of November, Chief Richard P. St. Sauveur, Jr., in an effort to bring awareness to the wounds affecting our Veterans, as well as to raise money for Home Base, will be permitting Smithfield Police Officers to grow facial hair.

Posted on September 28, 2018 by Bill Pilkington in Information, Press Release

Carsetti was taken into custody without incident.  He later appeared in Kent County District Court before the Honorable Magistrate Joseph P. Ippolito, Jr., and was held without bail as a violator of a recent charge.  Mr. Carsetti is scheduled to appear in District Court on October 11th, 2018, to be heard on the violation charge.

Posted on September 25, 2018 by Bill Pilkington in Information, Press Release

Borzell was taken into custody without incident.  He was held overnight and later appeared in Kent County District Court before the Honorable Judge Anthony A. Capraro.   Borzell was held without bail and has a bail hearing on October 9th, 2018.  His Pre Arraignment Conference date is December 26th, 2018, to answer the charges.

Posted on September 20, 2018 by Bill Pilkington in Information, Press Release

On Wednesday, September 19, 2018, at approximately 10:40 a.m., members of the Smithfield Police Detective Division arrested John B. Carsetti, age 52, of 2 Robert Street, Smithfield. Carsetti was charged with Possession of Marijuana with Intent to Deliver and Unlawful Manufacturing of Marijuana.

Carsetti was taken into custody without incident. He later appeared in Kent County District Court before the Honorable Magistrate Joseph P. Ippolito, Jr., and was released on $2,000 Surety Bail with a Pre Arraignment Conference date of December 19th, 2018.

Posted on September 16, 2018 by Bill Pilkington in Information, Press Release

On September 16, 2018, at 12:08 AM, Smithfield Police received numerous calls for a large disturbance in the parking lot of the Sky Lounge, located at 55 Douglas Pike in Smithfield. While police were responding, Smithfield dispatch received additional 911 calls reporting shots fired at that location. Smithfield requested North Providence Police and Lincoln Police to assist. Upon police arrival, there were approximately 150 people in the parking lot with several physical and verbal altercations taking place outside the establishment. Private security on scene advised that prior to police arrival, two gun shots were heard from the area of the southeast parking lot. Police were able to gain control of and disperse the crowd. No gunshot injuries were reported on scene. Police continue to investigate this incident.

One arrest was made during the disturbance. Christopher Martinez (Age 28), from Cumberland, was arrested for Simple Assault, Resisting Arrest, and Disorderly Conduct during the crowd dispersal. Martinez was transported to Smithfield headquarters and later released with a summons to appear for arraignment in District Court on October 2, 2018.

Anyone with information on the shots fired is asked to contact Smithfield Police at (401) 231-2500.

The Citizens’ Police Academy will start Thursday, October 11, 2018. Each week, a different law enforcement topic will be presented, with classroom and hands-on instruction by police officers. This academy is offered free of charge to Smithfield residents or any person who works at a Smithfield business. Seating is limited and will be on a first-come, first-served basis.

Full information and applications are available on the Citizens’ Police Academy page.

If you have any questions, please contact Operations Sergeant Kevin Proulx of the Community Policing Unit via email at kproulx@smithfieldpd.com. He can also be reached by phone at (401) 231-2500, (ext. 145).

Completed applications should be returned to the Smithfield Police Department no later than Friday, September 28, 2018.

Posted on September 12, 2018 by Bill Pilkington in Information, Press Release 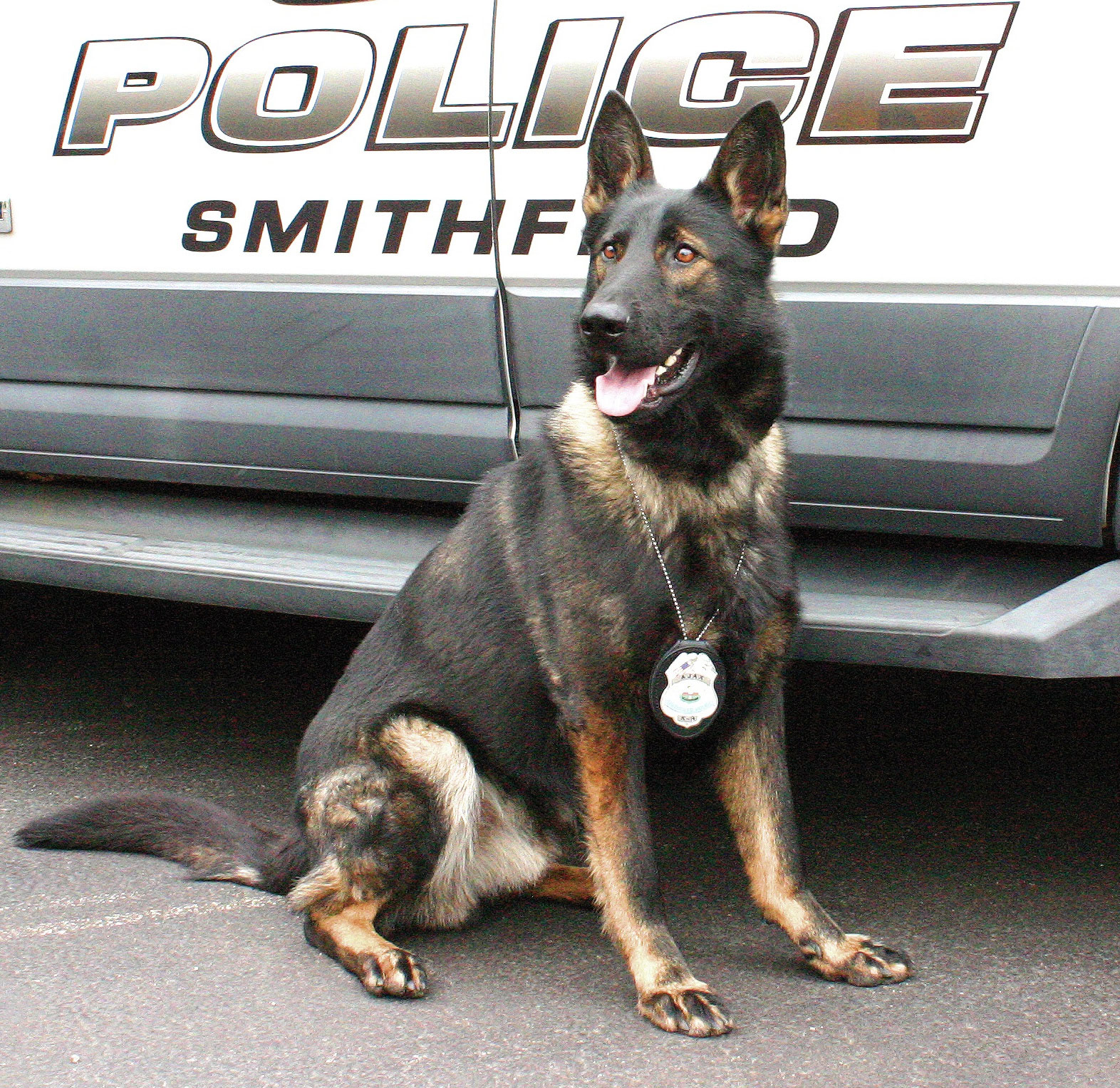 Smithfield Police Department’s K9 Ajax will receive a bullet and stab protective vest thanks to a charitable donation from non-profit organization Vested Interest in K9s, Inc. K9 Ajax’s vest is sponsored by a fundraiser hosted by the Gray Recreation Department in Gray, ME and will be embroidered with the sentiment “This gift of protection provided by Gray Recreation Dept.”. Delivery is expected within eight to ten weeks.

Vested Interest in K9s, Inc. is a 501c (3) charity located in East Taunton, MA whose mission is to provide bullet and stab protective vests and other assistance to dogs of law enforcement and related agencies throughout the United States. The non-profit was established in 2009 to assist law enforcement agencies with this potentially lifesaving body armor for their four-legged K9 officers. Since its inception, Vested Interest in K9s, Inc. provided over 3,100 protective vests, in 50 states, through private and corporate donations, at a value of $5.7 million dollars.

The program is open to dogs actively employed in the U.S. with law enforcement or related agencies who are certified and at least 20 months of age. New K9 graduates, as well as K9s with expired vests, are eligible to participate.

The donation to provide one protective vest for a law enforcement K9 is $950.00. Each vest has a value between $1,744 – $2,283 and a five-year warranty, and an average weight of 4-5 lbs. There is an estimated 30,000 law enforcement K9s throughout the United States. For more information or to learn about volunteer opportunities, please call 508-824-6978. Vested Interest in K9s, Inc. provides information, lists events, and accepts tax-deductible donations of any denomination at www.vik9s.org or mailed to P.O. Box 9 East Taunton, MA 02718.