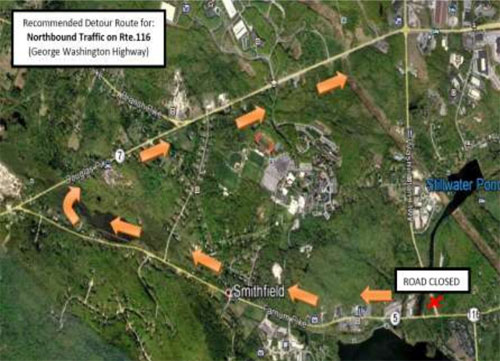 The George Washington Highway bridge (just north of Farnum Pike) is now closed through November of 2012. This means that many motorists will be seeking alternative routes. The Smithfield Police Department and the Smithfield Traffic Safety Commission have been taking steps to mitigate the impact on surrounding areas. The “official” detour redirects northbound Rte.116 (Pleasant View Avenue) traffic north on Farnum Pike, then south on Douglas Pike (see map). This adds about 7 minutes to travel times. Southbound Rte.116 traffic follows this route (reversed), but also has the option of Rte.295 south to Rte.44. Despite the establishment of an official detour route, it is likely that unofficial shortcuts and cutthrough roads will become the primary choice of motorists familiar with the area. The Police Department and Town Hall have already fielded some concerns from residents, and 1.) Rogler Farm Road to Brayton Road, 2.) Capron Road to Stillwater Road to Thurber Boulevard, 3.) Capron Road to Stillwater Road to Limerock Road, and 4.) Whitman Avenue to Fenwood Avenue to Whipple Road have been identified as the four routes that will see the highest increase in traffic.

Passive measures, such as speed bumps on Stillwater Road (in the area of house numbers #289 and #169),have already been approved. Also approved were stop signs on Whipple Road (at Ridge Road) and Stillwater Road (at Thurber Boulevard). These should collectively calm some of the problems; however, roads such as Capron Road and Rogler Farm Road (for example) will need to be consistently monitored by police, as they are more prone to excessive speed. The police department will be assigning numerous traffic posts to these roads. This traffic disruption and its anticipated problems are the police department’s primary focus for traffic enforcement during the upcoming weeks and months. Our variable messaging sign (VMS) will be used for the duration of the project to notify motorists that the speed limit will be strictly enforced, and to expect increased enforcement. Additionally, the VMS records traffic data
on speed and volume throughout the day, allowing us to periodically evaluate roadways to determine if our presence needs to be increased, maintained, or
allocated elsewhere. During this time, the most valuable input we receive will be from residents. Please feel free to forward your comments and concerns to traffic@smithfieldpd.com.

Copies of these emails will be forwarded to me as well as Sergeant Gerald Pezzullo, Traffic Services Coordinator. Sgt. Pezzullo will continue to
work closely with RI Department of Transportation to ensure that the concerns of our residents are being addressed. Hopefully, this information sheds some light on our planned response and is consistent with what you expect from the Smithfield Police Department.